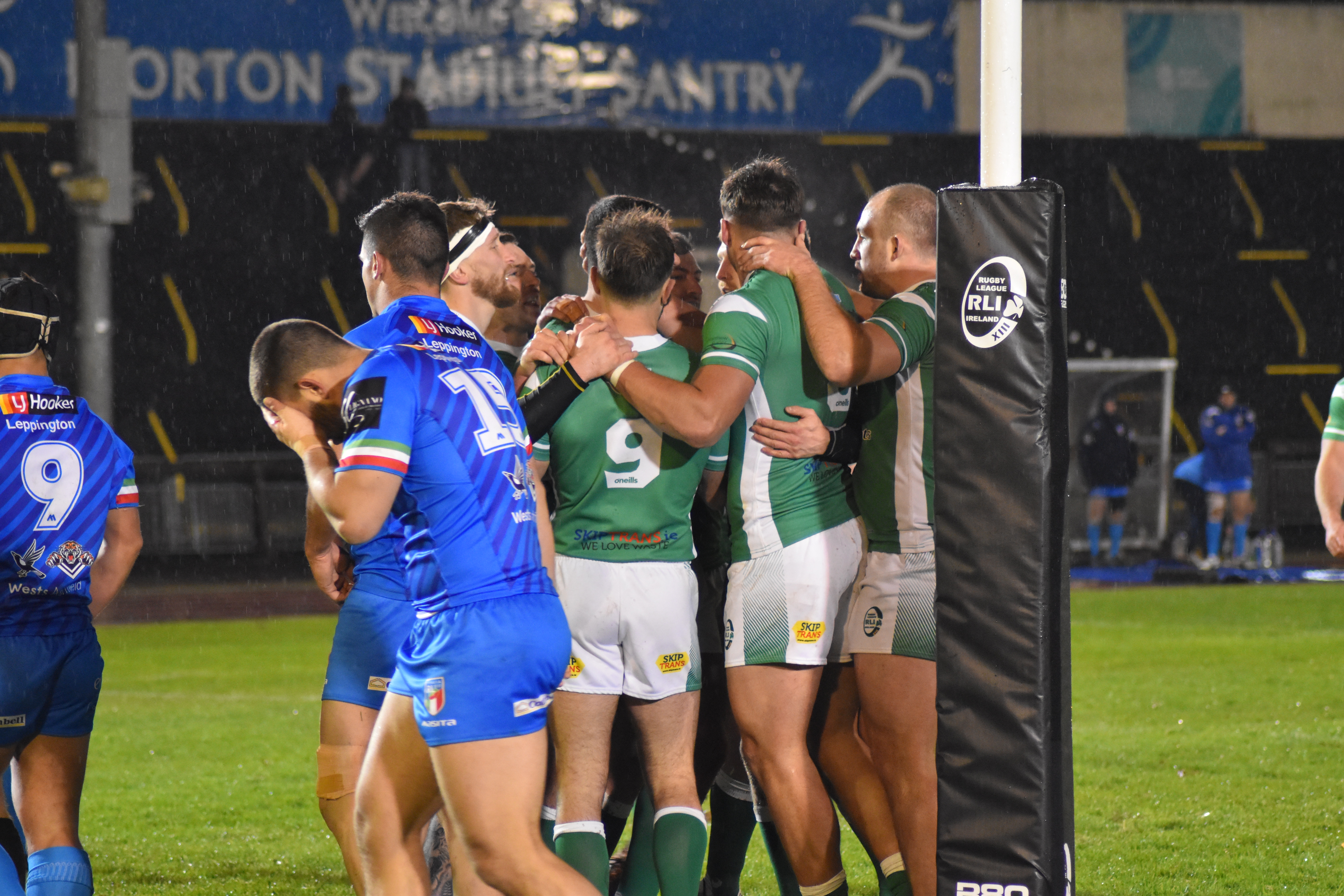 bragging rights as group winners and to secure ranking points. Ireland named a similar squad to

their victory over Spain, bringing in centre Zac McCombe and forward James Mulvaney to replace

Pat Moran gave him the opportunity to open the scoring. Roland Podesta converted to give Ireland

a flying start. From the resulting restart Ireland knocked on and Italy utilised the greasy conditions

to grubber through for Joseph Tramantana to dive on the ball to score a try.

George King on a switch and he wasn’t going to be stopped. Podesta added the extras to take the

score to 12-4. From the restart Italy kicked out on the full and Ireland took full advantage as Joe

forward the ball and momentum to crash through and score his second of the game.

Italy then got a consecutive sets of six tackles. owing to holding down and a tackle that caused the

referee to talk to two players. From the restart the Italians were held up the Irish defence forced a

The Italians, led by their livewire hooker Tramantana, setup well in attack but gave away a cheap

penalty by tackling the impressive Matthew Coade whilst he was airborne. The visiting side clearly

stepped up their defence and a huge hit drove the Irish back 10 metres.

own half, from the resulting kick great yardage by Ethan Ryan earned a penalty for a high shot and

Ireland started their set on the half way line. Ireland thought they were in for another try, before

the referee called them back for a forward pass. Italy then worked their way up the pitch and a kick

resulted in panic and Ethan Ryan was tackled in-goal which resulted in a goal line drop out. Italy

tried a similar tactic at the end of their next set but the ball went dead.

The game had settled down and both teams were working constructively through their sets of six,

with the occasional penalty giving them field position from which to attack. No further scores

possession 10m from the Italian tryline, when the ball carrier knocked on. The Irish themselves then

gave the ball back with a knock caused by a pass in tight quarters.

Ireland played a very strong set and caught the Italians ingoal, the fullback adjudged to have jumped

from the field of play. A clever drop out by the Italians, grubbering across field, cause the ball to

ricochet and the Italians were awarded a scrum for a knock on.

fourth scrum. Completion rates were low in the second half and the conditions weren’t helping.

Italy earned a repeat set and were determined to close the scoreline and get back into the game.

with a sharp cut-out pass, before returning to a more central position but they were met with a wall

of green and an error was forced. Italy were soon back in possession as a loose pass was intercepted

and they were on the attack again. Italy then became numerically challenged as two bouts of back

chat first earned an additional 10m and then 10 minutes off the field for Brendan Santi. Ireland

were awarded a further penalty due to a swinging arm. 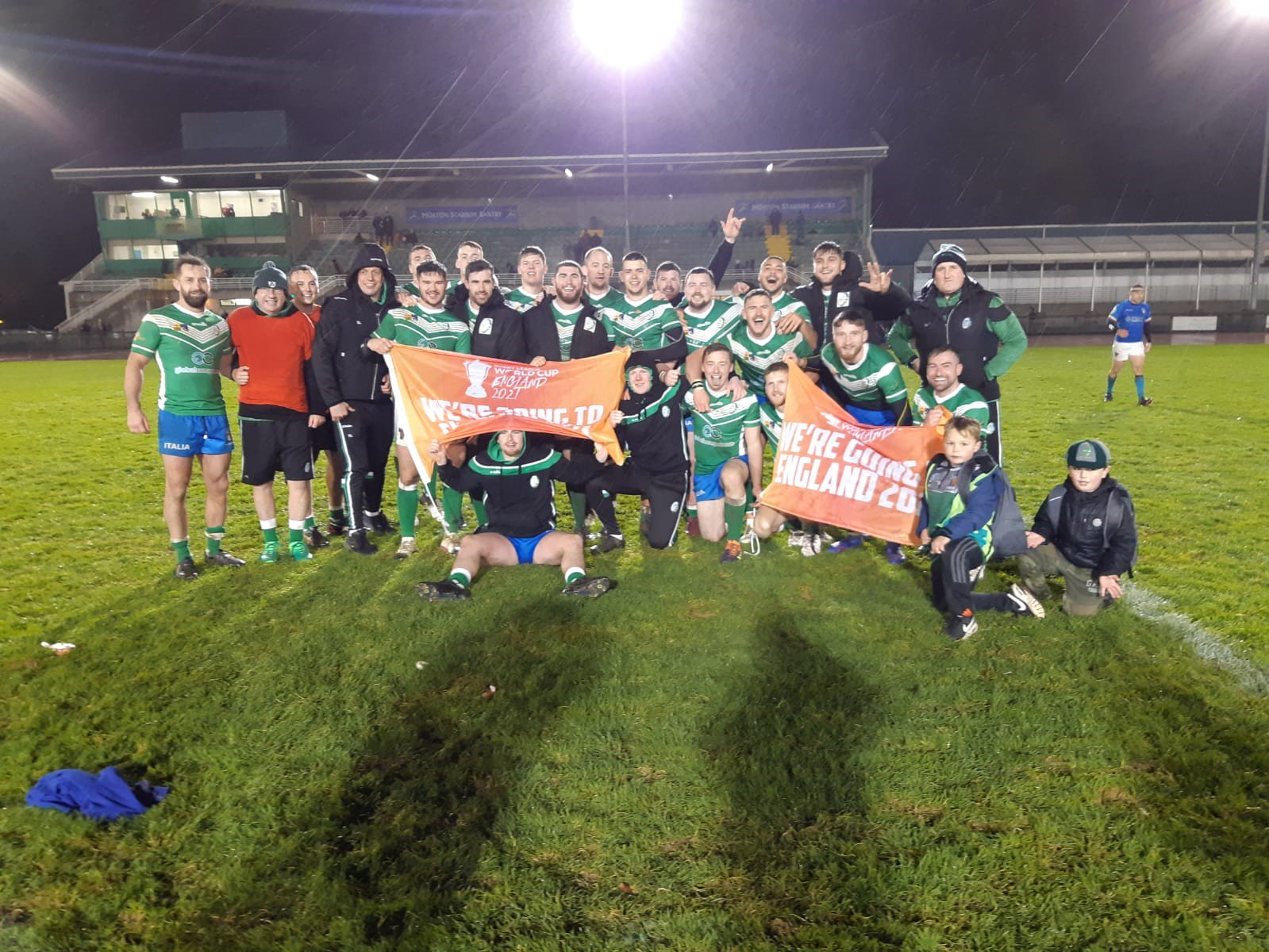 Ireland thought they had scored but knocked on ingoal. Italy then worked hard down the left to get

resulted in another error. The Italians soon gave away another penalty, for a leg tug.

The game had become stagnant as the weather, the handling errors and the pitch drained the

energy out of the players. Ireland caught a break and through good committed defence had

excellent field position 15m out. Joe Keyes met a wall of Azzurri blue at the next tackle and the

Italians ruined their superb work by standing over the ruck and causing confrontation, which was

duly penalised. The set ended by trapping the Italians close to their own line but a high tackle gave

the Italians a penalty.

Both defences had been strong out wide and neither was falling for the ball going out the back. On

many occasions it seemed like the defence had the overload in the wide channels. Time seemed to

be standing still as cramp started setting in on the players.

Ireland realised the game had to be played to the conditions and kept the ball tight. The Italians

continued to try and be creative, even at the cost of losing the ball. Then Ireland kicked a 40/20 to

by the Italians and they were back on the attack.

The Irish then coughed up possession as the ball carrier led by the elbow and was penalised. A knock

gave Ireland the ball back. Players on both sides were struggling to get back onside for their sets of

six. Play the balls were getting slower and less wrestling was taking place in the tackle. Ireland were

awarded a penalty in front of the sticks for holding down but chose to run the ball. A grasp at the

ball from a wide pass gave the Italians a scrum close to their own line. Amazingly the ball was flung

half. Podesta scored a superb conversion from out wide made it 11 successful kicks on the bounce

Ireland then worked down the pitch and Joe Keyes added an extra point. The game finished soon

after. Not a pretty game for sure but a hard-fought game and both sides should take credit for the

incredible effort they showed for 80 minutes.