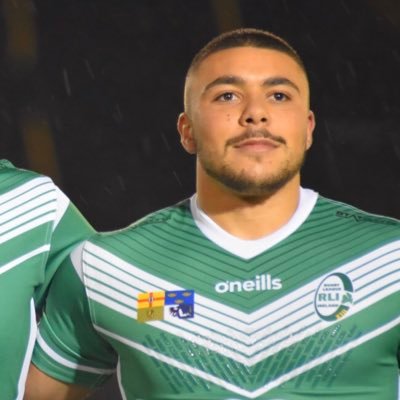 Huddersfield Giants and Senior Irish International 19 year old prop forward Ronan Michael will join the Canberra Raiders U20 side for the 2020 season. Michael will be the first player to take advantage of the clubs partnership arrangement with the Raiders and flies to the Southern Hemisphere with already two months full time training with the Giants first team squad under his belt. He will return to the Giants ahead of the 2021 season having signed extended terms to remain at the club.

Speaking to Rugby League Ireland, Michael said “Pre season has been great. I’m feeling good physically and looking forward to the rest of pre season here. The move came about a bit out of the blue. I seen that the club announced they had created an opportunity for someone to come over but I didn’t think I’d be lucky enough to go. Andy Kelly mentioned it to me and I was just buzzing I couldn’t say no, it was a no brainer for me.”

The move is both exciting for Michael and the rugby league diaspora here in Ireland. Michael will become the first Irish born player since Brian Carney to make his way to the NRL. From only picking up the sport 2 years ago to now playing in one of the most coveted academies in the world is a phenomenal achievement for the young lad.

Having arrived in Oz on Tuesday Michael has been enjoying getting stuck into training with the Canberra Raiders u20 side “I am most looking forward to getting around the lads and learning the game from a different point of view. I arrived on Tuesday morning and have been in training and everything now.” An incredible opportunity for Michael who knows more than anyone the hard work and graft required to succeed in the sport, a role model which any nation would be proud of. From humble beginnings to now the world is Michaels oyster as he will return to the giants ahead of the 2021 season with the added NRL experience.

Speaking to Michael Ronan you could hear the love for the domestic Irish game and never forgetting his roots. A product of the Longhorns Michael was quick to move the subject back to their all-important game this Sunday against Normanton Knights. Such is the testament of the young man that he has not forgotten his roots, watching on from Canberra Michael is like everyone in Ireland hoping for a Longhorns win “I reckon the Longhorns will go well on Sunday. Seeing the group of blokes they have this year I can’t fault to progress. Not only do they have newly capped Senior Internationals James Mulvany and Matty Coade involved again they also have the experience in Wayne Kerr and Matty Hadden. Speaking with Casey and I have seen some clips and the improvement in the shape over the past 12 months since the Challenge Cup last year is incredible. I reckon it’s down to the amount of Ireland u19, Student and Clubs games we have had this year providing the lads with a lot of experience to bring back to their club and everyone being on the same page come Challenge Cup time. Up The Horns